TLDR: Gro protocol uses ETH and AVAX on a day-to-day basis in order to manage strategies (e.g. harvests) and deploy new contracts (e.g. the new v2 Convex strategies). This proposal ensures the long-term viability of Gro protocol by allowing the DAO to self-fund any ETH and AVAX necessary to function. It also reimburses Grwth Lbs Ltd for fronting initial ETH and AVAX required to deploy and run Gro protocol.

Vote 011: Fund ongoing Gro protocol operational costs with up to 8 ETH and 160 AVAX per month and repay fronted ETH and AVAX to Grwth Lbs Ltd

Proposal that Gro DAO funds the ongoing Gro protocol ETH and AVAX costs up to 8 ETH and 160 AVAX per month for the next 12 months and that Gro DAO repay the existing spend of 75.74 ETH and 417.36 AVAX to Grwth Lbs Ltd.

These funds were fronted originally with a view to transferring ownership of Gro protocol entirely to the DAO. Now that this has occurred as part of the Gro DAO token launch, Grwth Lbs has no ownership stake or financial benefit from the protocol.

The running costs would be executed via the multi-sig on an ongoing monthly basis by transferring the relevant amount of ETH and AVAX to an operational DAO wallet controlled by core protocol engineers.

This repayment to Grwth Lbs would be implemented via a snapshot vote with a SafeSnap transaction to automatically transfer the funds on-chain to a Grwth Lbs Ltd wallet.

To allow for unusually high months (large deployments or high gas fees), the operational wallet would be permitted to build up a small reserve of ETH and AVAX up to a total of 3x monthly costs (24 ETH plus 480 AVAX). Once this limit was reached the multi-sig would transfer no more ETH or AVAX until the operational wallet was back below this level.

The proposed amounts are forecasts based off the historic data seen in this spreadsheet (screenshot of charts below): Gro DAO ETH / AVAX spend - Google Sheets 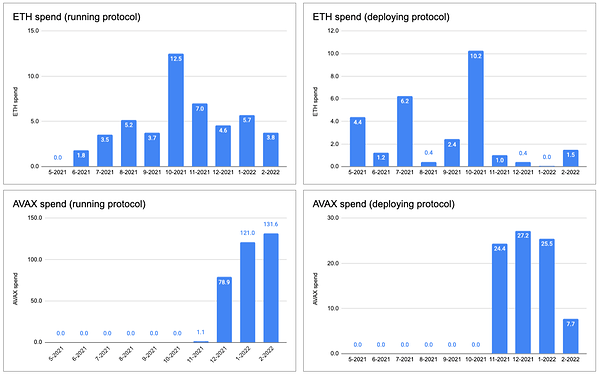 ETH spend is also available in Dune (AVAX not on Dune yet): ​​Gas fees

Examples of other DeFi protocols paying for gas

This is standard practice within the DeFi space. Many of the OG DeFi and DeFi 2.0 projects are transparent about their gas spends and the funding by the DAO. Below are two data points for yield aggregators in the space. Gro DAO proposed spend is comparable or less than these.

Risks of approving the proposal and steps to mitigate

Acquisitions of ETH and AVAX (made by way of a swap for USDC on a decentralised exchange) will be made by the DAO multi-sig to ensure that the Gro DAO Treasury has sufficient ETH and AVAX to fulfil the agreed operational costs.

In exceptional months, the protocol has required more than the amounts proposed (e.g. October 2021 the total deployment and running cost was 22.8 ETH).

We propose that the operational wallet which receives these funds keeps any excess each month, allowing the protocol to build up a small reserve of ETH and AVAX up to a total of 3x monthly costs (24 ETH plus 480 AVAX) for busy months or months with high gas fees.

Mitigated by all data being publicly visible on-chain, and with a publicly accessible dashboard setting out costs. If ETH and AVAX are visibly not being spent on gas (but e.g. being transferred to a private wallet) then multi-sig would be authorised to cancel future transfers. There is also a cap of 24 ETH and 480 AVAX beyond which no more gas would be funded.

After 7 days in the community forum, if there are no major unresolved objections or comments then the proposal will be posted as a vote at https://vote.gro.xyz where it will remain live for a further 7 days.

We will use dedicated discord channels and the weekly community call to discuss the proposal so that all DAO members are aware of the proposed changes and have the opportunity to consider and discuss ahead of voting.

Should we fund gas costs from the DAO and repay Grwth Lbs Ltd?

This repayment to Grwth Lbs would be implemented via a snapshot vote with a SafeSnap transaction to automatically transfer the funds on-chain to a Grwth Lbs Ltd wallet.

Update on proposed implementation: the SafeSnap transaction would substitute AVAX for equivalent USDC (priced at the time of gas spend, using Snowtrace data as the arbiter of price) as AVAX is not available on the Ethereum network which SafeSnap relies on.